for Sam Lofland and Miranda Zent

Standing Rock is the reservation where Sitting Bull was killed by Tribal Police. At Standing Rock in the Dakotas, after the visit by the holy prophet Kicking Bear, Ghost Dancers prayed and danced for the regeneration of the earth and the return of the buffalo during the Ghost Dance movement of the 1890s.

In the aftermath of the Fetterman Massacre in 1866 (the Sioux called it the Battle of the Hundred Slain), General William Tecumseh Sherman argued an Indian policy of “peace within the reservation and war without.” The simplest way of bringing Plains Indians to confinement, Sherman wrote to Philip Sheridan, was “to invite all the sportsmen of England and America … for a Great Buffalo Hunt and make a grand sweep of them all.” The buffalo herds vanished from the Northern Plains between 1876 and 1882.

When Sitting Bull returned from Canada and surrendered in 1881, he addressed US military officers: “I wish it to be remembered that I was the last of my tribe to surrender my rifle. This boy [Sitting Bull’s son] has given it to you, and he now wants to know how he is going to make a living.” [i] END_OF_DOCUMENT_TOKEN_TO_BE_REPLACED

“Lincoln Speaks to Freedmen on the Steps of the Capital at Richmond,” oil on canvas, by Gus Nall, 1963. (Credit: Wikimedia Commons)

Traditionally myths are considered stories about the gods. But more accurately, myths are stories from the gods. Perhaps it is more comfortable to consider them, according to the less beautiful terminology of our times, stories from the unconscious. In Jungian terms, myths are archetypal manifestations that take the form of narratives.

Ritual is the enactment of a myth (this is Joseph Campbell’s definition). Ritual performance brings myths into our reality, and according to Black Elk, spread their sacred power among the tribe, thus making the world “greener and happier.”

An angel can turn into a devil before our eyes: Lucifer becomes Satan. The reverse can also be true: Joan of Arc, burned as a witch, becomes saint. A myth can be perceived as containing a hero (George Armstrong Custer) engaged in mortal struggle with an antagonist (Sitting Bull), and a moral that legitimizes Custer as representing the forces of good and Sitting Bull as an evil avatar. But then times change, our hopes and fears transform, and reason—ever a servant to our formulations—re-casts Sitting Bull as a patriot warrior and Custer as a fool. END_OF_DOCUMENT_TOKEN_TO_BE_REPLACED

In these days of primaries and tawdry rhetoric by presidential candidates, it would be good to evoke the memory of the great orator and medicine man of the Lakota Sioux.

This is how Arthur Kopit, in his play Indians, painted the portrait of Sitting Bull:

I am here by the will of the Great Spirits, and by their will I am a chief. My heart is red and sweet, and I know it is sweet, for whatever I pass near tries to touch me with its tongue, as the bear tastes honey and the green leaves seek the sky. If the Great Spirits have chosen anyone to be leader of their country, know that it is not the Great Father, it is myself.

As we have chronicled in our book Hunt the Devil (Tuscaloosa: University of Alabama Press, 2015), Sitting Bull’s fiery rhetoric, the Plains Indians victory at Little Big Horn, and the Ghost Dance Movement of the late 19th century turned Sitting Bull into the devil we seek to destroy in every war—the evil leader of whichever people we target as our enemy. The death of Sitting Bull would be repeated, at the dawn of the 21st century, in the termination of an Islamic spiritual leader who had inspired — just like Sitting Bull — heinous crimes against the United States.[i] END_OF_DOCUMENT_TOKEN_TO_BE_REPLACED

Is it necessary, this late in the day, to say that the team name is racist? Is it essential to point out that the name and logo dehumanize my Indian grandchildren, and make us—the non-Indians, strangers in their own land—complicitous in keeping alive the ghost of centuries of genocidal policies, concentration camps euphemistically called “reservations,” and racial violence?

END_OF_DOCUMENT_TOKEN_TO_BE_REPLACED 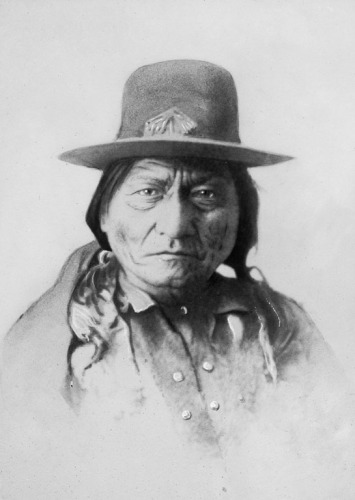 Take time this June 25—the day of the anniversary of the great battle—to memorialize Little Bighorn. The myth is remembered all throughout the Americas, even though the names of the combatants differ and the battle sites of the narrative vary: Custer and Sitting Bull in North America; Cortés and Montezuma in Mexico; Alvarado and Tecún Umán in Guatemala; Pizarro and Atahualpa in South America. The stories syncretize the fateful, violent encounter between Indian and European America. The confrontation still haunts our days, for we have not yet acknowledged that we are the bastard children of that conflict, and that our true American souls belong to one side as well as the other.