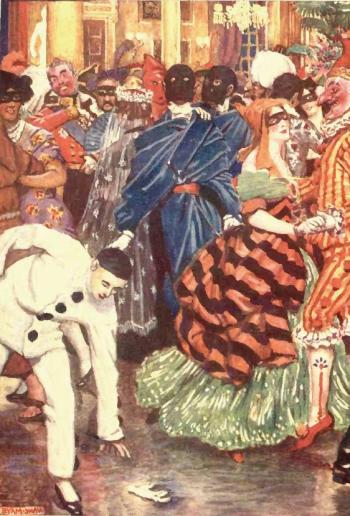 Byam Shaw’s illustration for Poe’s William Wilson in “Selected Tales of Mystery” (London : Sidgwick & Jackson, 1909) on the frontispiece with caption “A masquerade in the palazzo of the Neapolitan Duke Di Broglio.” (Credit: Wikimedia Commons)

Edgar Allan Poe’s haunting story of “William Wilson” (published in 1839 in Burton’s Gentleman’s Magazine) is a semi-autobiographical tale of conscience worth invoking in the midst of our present political struggles. It is a ghostly story of conquering one’s alter ego, of the demoralizing consequence of slaying the second, better self. It is told as a cautionary tale, the redemptive purport of which comes from reflecting on the consequences of one’s own avarice rather than projecting blame outward.

The bane of unacknowledged greed, lust, and ambition, which is at the heart of Poe’s tale, can be extended beyond the individual to implicate a nation. Indeed, William Wilson’s struggle with his doppelgänger might serve well as a parable for collective contemplation. Understanding his moral demise should prompt us to reclaim the spirit of the nation.

William Wilson is the story’s narrator. Although this is a fictitious name, his unrevealed real name is equally common and not dissimilar. The name’s plebeian overtones are venom to his ears. Also, his real name is an object of scorn throughout the world. He has led a life of unpardonable avarice and crime spurred from childhood by evil propensities. He is steeped in misery over his destiny.

William Wilson met his lifelong adversary in the earliest years of childhood schooling, a youngster who bore his same name and birthdate, showed a physical resemblance, entered school on the same day, and competed with him in the classroom and on the playground daily, doggedly interfering with his will by insinuating advice. To Wilson’s chagrin, his namesake imitated Wilson’s dress, copied his gait, and spoke just like him, except in a whisper. Wilson acknowledges now that he might have become a better and happier man had he “less frequently rejected the counsels embodied in those meaning[ful] whispers which I then but too cordially hated and too bitterly despised.”

When William Wilson moved on to Eton for three years of folly rooted in habits of vice and debauchery, he once again encountered the admonition of the other Wilson. Again, this time at Oxford, his namesake interfered with his follies, precisely when Wilson was financially ruining a young Lord Glendinning by cheating at cards. After that he fled in vain to Paris, Rome, Vienna, Berlin, and Moscow, only to be relentlessly pursued by his tormentor.

Wilson, terrorized by the other Wilson’s elevated character and wisdom, finally succumbed completely to wine in Rome at Carnival, which he attended in masquerade with the intention of seducing the young and beautiful wife of the old and doting Neapolitan Duke Di Broglio. Sure enough, Wilson was interrupted on his way to rendezvous with her by a tap on his shoulder and that “damnable whisper within my ear.” In a frenzy of anger, he challenged his tormentor to a duel of swords, overpowering him by sheer strength and stabbing him fatally. At that moment, Wilson saw his own image in the mirror “with features pale and dabbled in blood, advanc[ing] to meet me with a feeble and tottering gait.” It was his antagonist, no longer speaking in a whisper:

You have conquered, and I yield. Yet henceforward art thou also dead—dead to the World, to Heaven, and to Hope! In me didst thou exist—and, in my death, see by this image, which is thine own, how utterly thou hast murdered thyself.

The profligate William Wilson, who encountered his conscience as a rival, competed against it, ran from it, and then killed it, ultimately to see his own image reflected in the mirror and to realize then that he had rightfully entered the realm of the living dead.

The telling of his own fate turns William Wilson’s story into one of redemption by recognition rather than the more common act of projecting an inner evil onto someone else. There is no demonized scapegoat at the end of this story. The problem is a recurring and persistent failure to listen to the whispers of conscience.

How might this lesson apply to the nation as a whole, a nation deeply polarized, increasingly violent, and profoundly challenged by the intersection of a long list of urgent problems including global warming, population displacement, health care deficiencies, income inequities, mass shootings, police violence, discrimination, militarism, and more? Has our collective avarice, past and present, doomed us to the realm of the living dead?

An unconscionable discourse that is hurtful, selfish, willful, predatory, and vicious has no standing in the land of the living. The country cannot afford to affirm or follow those who would slay our democratic conscience and goad us to point the finger of blame at victims of our own imperial hubris and voracious appetite. The time to gaze into the mirror of conscience is now before we lose Hope.