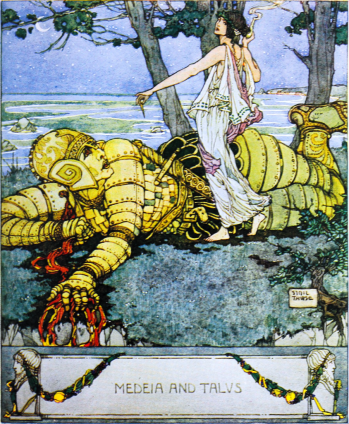 From “Stories of Gods and Heroes” (1920) by Thomas Bulfinch with color illustrations drawn by Sybil Tawse. (Credit: Wikimedia Commons)

I am among the apparent majority of American voters opposed to Donald Trump’s election and re-election. The majority wasn’t big enough in 2016 and may be too small in 2020 to overcome the negative effects of indirect election, gerrymandering, voter suppression, and foreign interference. As a citizen of a decidedly red state, I register my vote in full knowledge that it will not count in the final tally, since the presidential candidate with the most popular votes in Indiana, even if just a plurality, receives all eleven of the state’s electoral votes. Winner-takes-all rather than proportional allocation is the case in 48 of the 50 states, red or blue, big or small. It allows a candidate who loses the popular vote to win the office. If the electoral college was supposed to prevent the selection of a manifestly unqualified candidate, recent experience suggests that choosing the winner directly by popular vote might serve the country as well or even better.

The disrepair of the political system is bad enough to undermine the credibility of presidential elections. So long as the political culture is askew, however, the chances of selecting a qualified president will not necessarily increase even if we abandon the electoral college, prevent voter suppression, rein in gerrymandering, and stop foreign intervention. We’ve little reason to bank on the redeeming outcome of the popular vote when the culture itself does not reflect democratic values.

We Americans are at war with ourselves, embittered against one another, torn asunder, and consumed by violence of word and deed. We have degenerated into a fractured citizenry of an unacknowledged war state. Our stupefied indifference to US imperialism haunts us. We treat one another with the same imperial insensibility we have inflicted on foreign lands. Such is the political specter of infinite war.

Contemporary politics is war by other means extended to infinity. It is not limited to RedState code for progressives undermining the nation or to a ZeroHedge aphorism for a second Civil War to save what is left of white America. More broadly, it refers to a fundamental transformation and disfiguration of US political culture. As war becomes boundless, imperceptible, and unaccountable, political norms incline toward antagonism, violence, and authoritarianism applied to all walks of life. The war state constitutes politics in the image of war culture. War is everything, everywhere, always, and nearly as invisible as the air we breathe. We have become fully accustomed to it.

The specter of war converts elections into battlegrounds at a cost not just to the integrity of the system of governance but also to the basic disposition of the country. Presidential elections, in particular, are theaters of war where nearly anything goes if it will help one side prevail over the other, even if the winner is dangerously unsuitable to hold office.

Donald Trump’s presidency is the culmination of decades of degeneration into the oblivion of assimilated militarism. Andrew Bacevich says it well when he observes in ironic overtones that Trump is a “shameless liar” whose presidency invites us to confront myths about our country. Trump the “bullshit artist” reflects the times in which he was produced. “Within all the excrement,” Bacevich allows, “lie nuggets of truth” which demolish myths that government advances the common good, that justice is blind, and that war is a means to greater ends, not an end in itself. Our wars are continuous and self-sustaining. Instead of democracy and peace, they produce illiberalism, death, and destruction abroad and at home.

Randolph Bourne foresaw in 1918 that war, while noxious to democracy, is the “health” of the state. In the militarized state, the Executive rules over the people like an absolute monarch in the service of the ruling economic class.

We are a war-inured people, so much so that war is induced and sustained by tropes of entertainment, tunnel vision, and invisibility. Roger Stahl provides a useful treatment of “militainment” and, most recently, “the weaponized gaze” to reveal the convergence of war culture with public culture and to show how the illusion of precise, sterile warfare renders civilian suffering invisible as it substitutes narrow tactical questions for larger concerns about war’s purpose, wisdom, and consequences.[i]

Indeed, the invisibility of nonstop warfare is corrosive to democratic culture. A lack of transparency inherent to contemporary technology makes war eternal within the cultural surround. It is easy not to notice war, Allegra Harpootlian and Emily Manna explain. Artificial intelligence already is used by the military under the moniker “Project Maven.” It sifts through drone surveillance footage quickly and efficiently to select future targets for drone strikes. Like other complex AI systems, it makes mistakes, such as misidentifying targets, and is potentially vulnerable to undetected hacking.

Perhaps even more dangerous, Harpootlian and Manna argue, is the secrecy surrounding AI’S development and utilization—a level of secrecy that reinforces blind faith in technology’s ability “to make lethal force ever more precise and efficient” and that weakens accountability “by distancing policy makers and even the military itself” from AI’s potential to “make violence more, not less, prevalent.” Such lack of political accountability is largely why war now, in the overreaching language of the Pentagon, is considered “infinite.” Infinite war is easier to wage when it is hidden from public view and fought by “unaccountable machines.” Stealth is the modus operandi of drone warfare.

War is hidden more easily from the public and made less accountable when there is an all-volunteer army instead of a draft and military budgets are approved without raising taxes, and when war decisions are routinely delegated by Congress to the Executive. Perpetual war is normalized, with the public habituated to empty patriotic ritual, to the extent that alternatives are nearly unthinkable. War is technological wonderment fought by professionals using smart weapons to destroy remote targets, a digital phantasm that renders death unreal and war innocuous.[ii]

The circus that is Donald Trump, itself a travesty, distracts us from seeing the evolution of an invisible, self-sustaining war machine that has morphed into an undemocratic state of domestic political combat. The chickens have come home to roost, so to speak. Trump’s antics demolish democratic politics and institutions. They hog our attention and block from view the domestic impact of furtive militarism.

Environmental stewardship, economic wellbeing, social justice, and peacebuilding are intertwined with a democratic sensibility. Our immediate priority, then, should be to align political culture with democratic values rather than the unprincipled ways of unlimited war. It takes democratic vision to see through demagogic distractions.

[ii] Robert L. Ivie, “Democracy and Militarism,” in The Marketing of War in the Age of Neo-Militarism, ed. Kostas Gouliamos and Christos Kassimeris (NY: Routledge, 2012), 87-106.