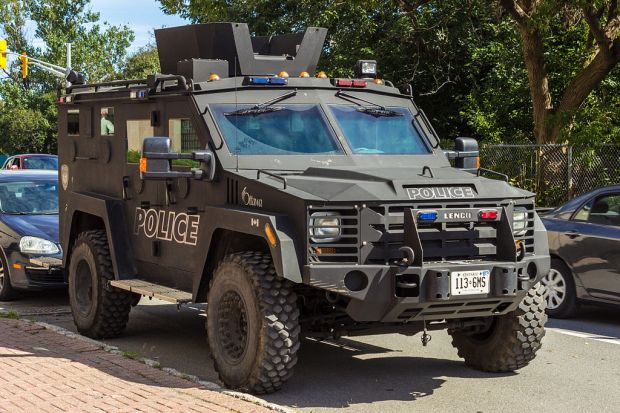 ‘Trust between law enforcement agencies and the people they protect and serve is essential in a democracy.”

“Armored vehicle use by police departments is not new but has recently become quite controversial due to some individuals[‘] misconceptions of the intended use of these vehicles. Unfortunately, some law enforcement agencies have used the vehicles in what, even to the greater law enforcement community, would seem to be, given what is known, an inappropriate fashion.”

Police departments prefer to call it an armored rescue vehicle, used to transport and protect officers in hostile situations and to protect and recover civilians during terrorist threats or hostage situations. It is deployed in the US by police departments in Chicago, Dallas, Denver, Honolulu, Los Angeles, Miami, St. Louis, New York, Orlando, Salt Lake City, San Francisco, and many more cities.

The Lenco BearCat is mounted on a Ford F550 Super Duty Chassis. Its windows can withstand .50 caliber bullets; its floors are blast resistant; it comes with gun ports, and it can be affixed with battering ram, spotlights, powered turret with ballistic glass panels and blast shields, tear gas deployment nozzle, and CROWS (a mounted remote weapons system). 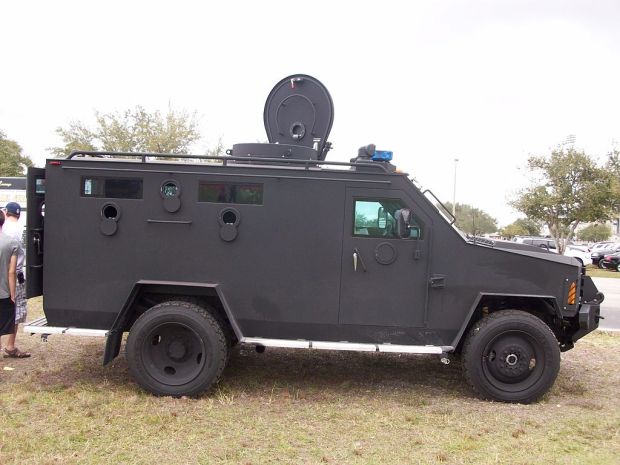 Word spread in February of this year that the Bloomington, Indiana police department has purchased a BearCat. Controversy quickly followed. Public officials tried to explain why there was no cause for concern. Protesters disrupted the mayor’s state of the city speech. City council members offered reassurances. Public meetings were scheduled to discuss the matter.

Even though the city gets a C+ on crime and safety from neighborhoodscout.com, the vast majority of residents reportedly feel either pretty safe or very safe. I count myself among them, but I am careful about when and where I walk or ride my bicycle, and I keep my house and car locked.

There have been some hostile incidents here in Bloomington. The Bloomington Police Department’s own list of recent incidents, where the lack of an armored vehicle could have endangered officers and others (see Indianapolis Channel 6 ABC affiliate news story), consists of the following:

The City of Bloomington will pay $225,000 for its BearCat.[i] According to one city council member, the council approved a $604,000 request from the police department for vehicle replacement equipment, a request that did not specify the vehicles to be purchased or make any mention of buying an armored vehicle.

The protestors, one of whom was a Black Lives Matter organizer, used a megaphone to shout down the mayor, forcing him to quit his state of the city speech. Their complaint was that the truck, already purchased and under construction, effectively militarized the local police without including the community in the conversation. The Black Lives Matter organizer sees what happened in Bloomington as consistent with a national trend.

I should note that Bloomington is a Democratic Party stronghold, or perhaps I should say outpost, in Republican-controlled Indiana, where Vice President Pence was governor. The BearCat was acquired in a town that considers itself to be enlightened, liberal, and progressive.

The chief of police assured the community, and a city council member reiterated, that militarization is not an issue for Bloomington, like it is elsewhere. BearCat is just a big bulletproof pickup truck that will be used to protect officers in rare standoffs with a shooter or in a hostage situation. It will not be used to suppress any peaceful march or protest rally in the city. It is intended for open shooter situations. Besides, it is only an armored vehicle, not an armed vehicle. Arming it would require the city council’s approval. One must wonder if that approval would be given again to a request as opaque as the one that led to BearCat’s initial purchase.

City officials acknowledge it would have been appropriate to involve the community in a discussion before the vehicle was purchased. So, to fix that, they will now—after its purchase—schedule some public meetings to discuss it.

The editorial opinion of the local newspaper covering the story sums up the matter this way:  “It’s really unfortunate that a modern police department needs to have an armored vehicle, but it is [a] necessary bit of insurance.” The editorial concludes, in a national context of mass shootings, that the BearCat is needed by the Bloomington police “to protect themselves and citizens from nuts with weapons, not to perpetrate violence against anyone.”[ii] 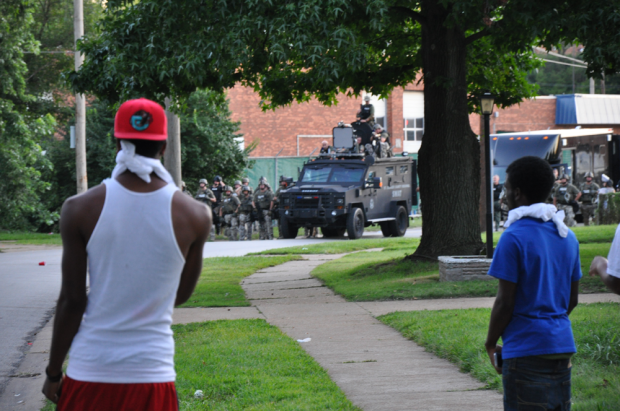 That rationalization sounds naïve—maybe disingenuous—to me.  Bloomington is not Chicago or Los Angeles, but more importantly Bloomington, Chicago, and Los Angeles are not war zones subject to military occupation. What is happening in Bloomington, Indiana reflects the normalization of the war metaphor, the specter of war culture in the heartland, where the trope of terrorism rules. Even as we lament school massacres perpetrated with AR-15s, we fail to acknowledge the link between war culture and gun violence.

Can we trust our public officials when they assure us that these armored military vehicles will not be turned against the public, regardless of how sincerely those assurances are given? The trouble with such assurances is reflected in the hedging ambiguity of the language used:

“Without any doubt, law enforcement agencies are not, and should never be seen as an ‘occupying army’ to any portion of the community that we serve. Law enforcement is, however, charged by that same community to have the capabilities to safely and effectively deal with situations which could be reasonably foreseen that threaten both life and property.”

“While it is certainly hoped that the true capabilities of this vehicle will never be used, it is, sadly, a matter of history that circumstance[s] arise that put the almost 100,000 people who call Bloomington home and the 2.5 million visitors to the City every year at risk and clearly show the need for the City of Bloomington to possess the capability to safely handle any event which occurs.”

[ii]Editorial, “State of the City Definitely Not Normal After Speech Disruption,” The Herald-Times (Bloomington), February 17, 2018, p. A11.