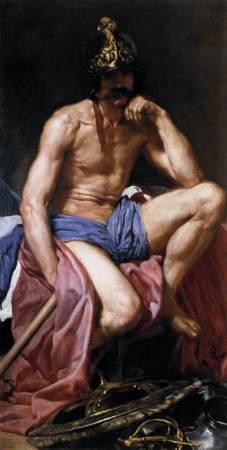 Mars, symbol of power and majesty, began as the guardian of the land but developed into the god of war as Rome pursued the ambition of empire.  Imperial Mars traveled with Roman Legions into battle at the far reaches of the world.  He protected the homeland from afar and made peace by means of war, unlike the Greek god Ares for whom destructive warfare was an end in itself.  The union of Mars and Venus (war and love) produced Harmonia (harmony and concord).

War travels to pacify, following the logic of the archetype.  It moves from one place to another, relocating periodically in search of enemies to engage.  Migration is the mythic dynamic, the self-sustaining act, of militancy.  And as the state embraces the wayfare of militarism, it drifts from republic to empire (Rachel Maddow, Drift, 2012).

Obama’s war on terrorism not only is timeless, but it also is migrant.  The traveling image of America at a crossroads frames the President’s speech on drone warfare (May 23, 2013).

The speech—delivered in the nation’s capital at the National Defense University—is about defending the homeland by pursuing terrorists in distant lands.  There, on the grounds of the Army’s Fort McNair, the President spoke of Americans serving in uniform since 1791, “standing guard in the earliest days of the republic, and contemplating the future of warfare here in the 21st century.”

America’s fight for independence, Obama recounted, was followed by civil war, a struggle against fascism, and a long Cold War.  Battlefields changed and technology evolved along the way.  Today’s long war against terrorism began with 9/11, sending us first to Afghanistan and Iraq, then shifting the battleground to Yemen, Somalia, and North Africa.  The hunt for al Qaeda affiliates takes our military forces to “distant and unforgiving places . . . remote tribal regions . . . caves and walled compounds . . . empty deserts and rugged mountains.”  These are the faraway places that constitute the “imminent threat” to “our cities at home and our facilities abroad.”  History advises us to pursue terrorist leaders and organizations relentlessly so that we might someday bring this war to an end.   The eventual victory over terrorism will be a measure of the nation’s character, and it will be measured by the blessings of peace.

This isn’t an image of place that conveys a sense of everywhere war so much as an image of mobility, travel, migration, which makes war peripatetic and gives it a sense of perpetual movement from one battlefield to the next.  The U.S. follows the threat wherever the reconstituted enemy takes us.  This enemy lives in cyclical time, reborn out of the ashes of fiery war, which in turn regenerates the militancy of empire.   Phoenix is the self-renewing fire spirit, the mythical bird resembling an eagle that roamed the lands of Arabia and became the symbol of undying Rome.

Imperial warfare reborn to roam is a mythic force of ancient lineage and current relevance to our migrant war on terror.